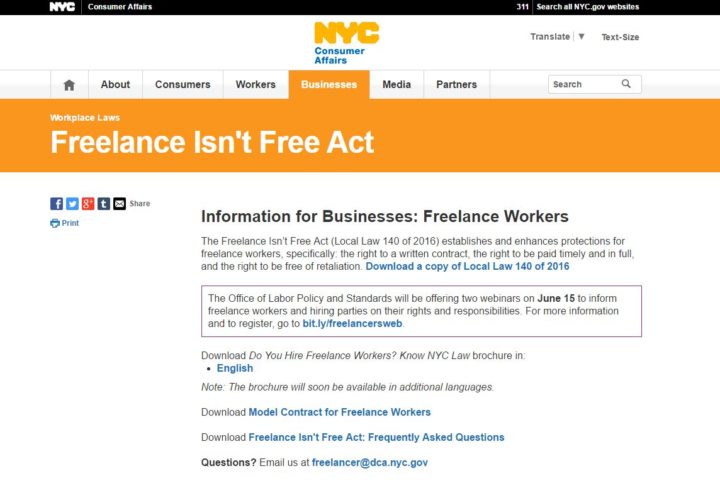 With the Freelance Isn’t Free Act (FIFA) becoming effective on May 15, 2017,  The New York City Consumer Affairs Department provided this copy of Local Law 140 of 2016.

Note: New York City businesses must comply with all relevant federal, state, and City laws and rules. All laws and rules of the City of New York, including the Consumer Protection Law and Rules, are available through the Public Access Portal, which businesses can access by visiting www.nyc.gov/consumers.  The Law and Rules are current as of January 2017.

Please note that businesses are responsible for knowing and complying with the most current laws, including any City Council amendments. The Department of Consumer Affairs (DCA) is not responsible for errors or omissions in this packet. The information is not legal advice. You can only obtain legal advice from a lawyer.

This chapter shall be known and may be cited as the “Earned Sick Time Act.”

Director. The term “director” means the director of the office of labor standards established pursuant to section 20-a of the charter.

Freelance worker. The term “freelance worker” means any natural person or any organization composed of no more than one natural person, whether or not incorporated or employing a trade name, that is hired or retained as an independent contractor by a hiring party to provide services in exchange for compensation. This term does not include:

Hiring party. The term “hiring party” means any person who retains a freelance worker to provide any service, other than (i) the United States government, (ii) the state of New York, including any office, department, agency, authority or other body of the state including the legislature and the judiciary, (iii) the city, including any office, department, agency or other body of the city, (iv) any other local government, municipality or county or (v) any foreign government.

Office. The term “office” means the office of labor standards established pursuant to section 20-a of the charter.

§ 20-934 Civil action for pattern or practice of violations.