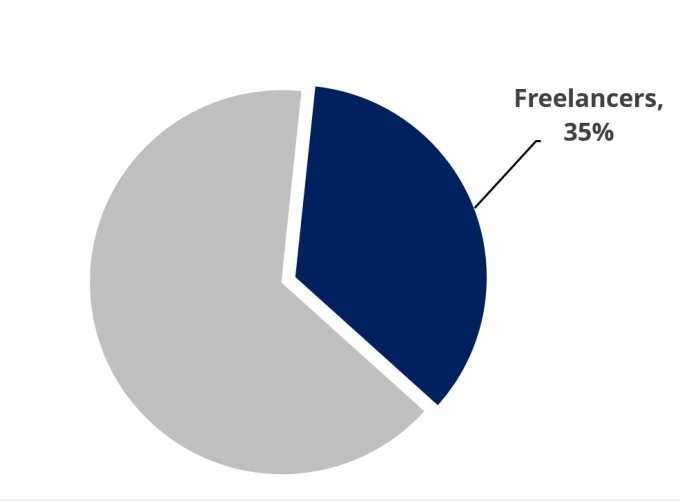 From Forbes, Elaine Pofeldt discusses a survey of freelance workers that showed that 35% of workers are freelancers.  The survey defines freelancers as “individuals who have engaged in supplemental, temporary, project- or contract-based work within the past 12 months.”  Elaine writes:

A large-scale survey of the freelance economy shows that the number of freelance workers is growing quickly, with the number of U.S. freelancers hitting 55 million this year, up from 53 million in 2014 and 53.7 million last year.

Freelancers now make up 35% of U.S. workers and collectively earned $1 trillion in the past year, according to the “Freelancing in America: 2016″ survey released this morning by the Freelancers Union, based in New  York City, and the giant freelancing platform Upwork, headquartered in Silicon Valley. The Freelancers Union represents 300,000 members.

The news is significant at a time when both the Democratic and Republican presidential candidates have made the need for more traditional full-time jobs a centerpiece of their campaign. In today’s economy, more people are creating their own jobs than ever before. Whether they have done so voluntarily or because they were forced into it by lack of a traditional job, many of these taxpayers do not have access to the traditional social safety net, such as unemployment insurance, or access to health care they can afford.

Read the full story at Freelancers Now Make Up 35% Of U.S. Workforce