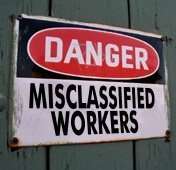 From JDSupra, Cristina Guido and Theodore Penny of Haight Brown & Bonesteel discuss a recent California case, Noe v. Superior Court Los Angeles (Levy) (Case No. B259570).  In Noe, the court said that a company that is aware that a co-employer has willfully misclassified workers may be liable for the willful misclassfication.  Cristina and Theodore write:

“In its decision, the Court of Appeal held that section 226.8 is not limited to those who make the affirmative decision to misclassify employees. The court interpreted “engage in” to mean that the Legislature intended to cast a wider net and penalize a “broader class” of employers, including those who “have knowingly participated or involved themselves in the willful misclassification” of individuals through their acts or omissions. However, the Court carefully noted that the phrase “engage in” requires that the employer must have been involved in the voluntary and knowing misclassification. “Merely employing workers who have been willfully misclassified by a co-employer is, standing alone, insufficient.” In other words, if a company has no knowledge of or involvement with the allegedly improper misclassification, it should not be held liable.

At the same time, the Court rejected plaintiff’s argument that a joint employer of an individual who has been misclassified by a co-employer is subject to penalties under section 226.8 by way of joint and several liability. Further, the Court concluded that this plaintiff class could not recover civil penalties under section 226.8 because the statute does not provide a private right of action. Rather, it is for the Labor Commissioner to enforce the section.

Noe is a cautionary tale to joint employers, including those who contract with other companies to provide labor – liability under section 226.8 is not limited to the employer who enters into contracts with companies that misclassify workers as independent contractors. The Court’s holding exposes the companies that benefit from misclassification to the risk of liability, holding that knowing participation in misclassification through acts or omissions may give rise to civil penalties under section 226.8….”