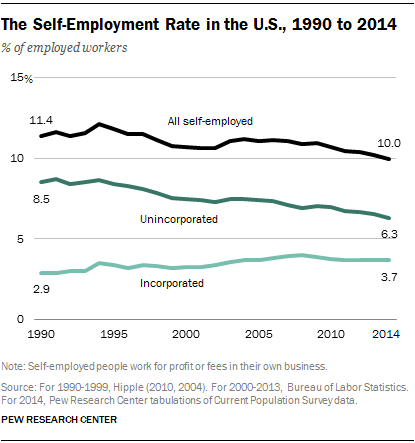 From Marketplace, Andy Uhler discusses the challenges of the Pew Research Center study — the data collected by government agencies may not be asking the right questions.  It’s hard to tell if the gig economy is growing or declining if the data doesn’t accurately capture the gig economy.  Andy writes:

Pew used the latest U.S. Census numbers for the study, and it’s not that the data is wrong, it’s just incomplete. Or maybe the census isn’t asking the right questions.

“Since it’s a self-identification, some may say they are self-employed, some may say not,” said Rakesh Kochhar, who wrote the Pew study. “So, how you identify yourself would probably require an additional set of questions.”

Those are questions that the Bureau of Labor Statistics doesn’t ask yet, and maybe should, said Susan Houseman with the W.E. Upjohn Institute.

“The current population survey is trying to pick up what is your main job and then it will also pick up a second job,” she said. “So, to the degree that people are picking up side jobs, they may well not report that.”

Source: How many people work in the ‘gig economy’?