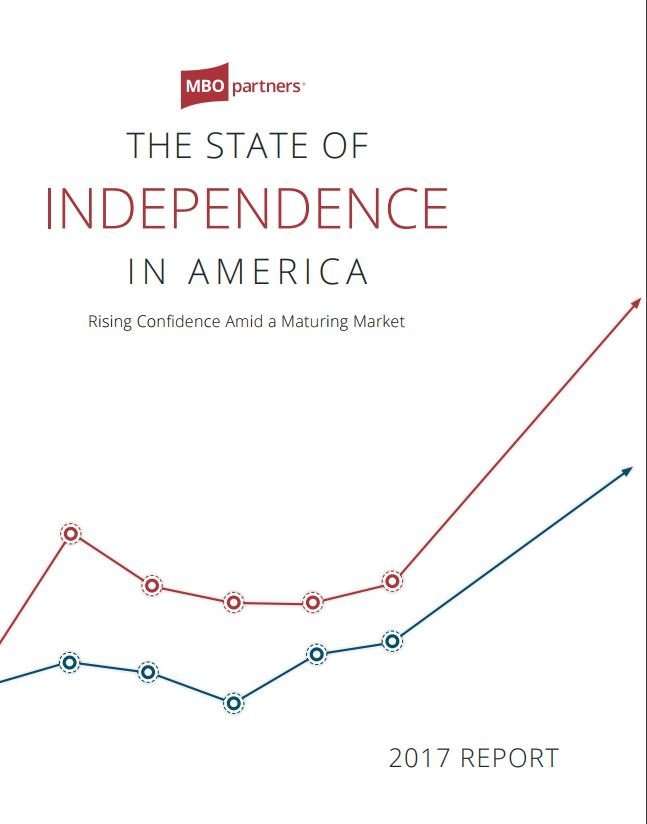 From BusinessWire, the global leader in press release distribution and regulatory disclosure, shares the press release for MBO Partners State of Independence in America 2017.

The independent workforce continues to grow and mature, even as the economy continues to rebound and the unemployment rate declines, according to MBO Partners, the nation’s largest provider of business services and tools to the self-employed and companies who engage them. The company today released its 2017 State of Independence in America Report, the country’s longest-running end-to-end survey of the American independent workforce.

According to the new report, the total number of self-employed Americans aged 21 and above rose to 40.9 million in 2017, up 2.8 percent from 2016. Independents, who now represent about 31 percent of the U.S. civilian labor force, are distributed across every demographic, age, gender, skill and income group.

“The State of Independence report, the only of its kind with seven years of trending data, shows definitively that independent work is the way of the future,” said Gene Zaino, CEO of MBO Partners. “Even against a strong economy, independents, particularly in skilled labor markets, choose this path over traditional employment. Sixty-five percent of all independents say that independent work was their choice entirely, and this number will continue to rise as organizations compete in a war for top talent in highly competitive fields such as engineering and computer science.”

Independents work in all segments of the U.S. workforce and are of vital impact to our economy, generating roughly $1.2 trillion of revenue for the U.S. economy, equal to about 6 percent of U.S. GDP.

“While we continue to see differences in attitudes between the different groups of independent workers, the population generally reports that independent work—and the independent lifestyle—is a satisfying way of building income and obtaining greater freedom, control and purpose,” said Zaino. “The very structure of work in America is evolving, and the demand for skilled independents will only increase as companies look to become more agile and flexible in the future.”