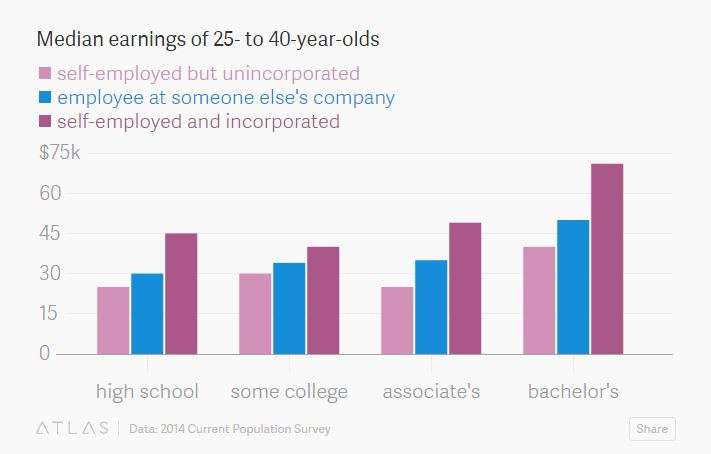 From Quartz, Allison Schrager discusses the challenges of the gig economy and offers solutions to some of the problems.  For example, the government could support a market for wage insurance to help independent contractors during periods when they do not have enough work.  Allison discusses how all non-employees are not the same.  Shje writes:

But in some ways this shift is like trying to shove a square peg into a round hole. It’s not clear the contractors even want to be on staff.Research by Princeton economist Allan Krueger and Uber’s Jonathan Hall estimates most Uber drivers prefer the arrangement because they like the flexibility. There’s little evidence they are Uber contractors because they can’t get a regular job; very few drivers were unemployed before they worked for Uber.

And gig workers aren’t all the same. The media have made it feel like contract and contingent workers are taking over the labor force. But there is no consistent data to count their numbers. Self-employment rates don’t tell us much about trends in contract work because they capture all different kinds of entrepreneurs: family-owned businesses, doctors, plumbers, etc. Many contract workers are also moonlighting from their primary jobs.

Contract work is riskier, but that comes with upside—independence, the potential for more money, even if pay is more unpredictable, and other long-term benefits. It can teach a broad set of skills, which are more valuable than what you’d learn as an employee at one particular company. In the tech-driven world, it pays to be adaptable, able to communicate with a diverse set of people, and have relationships with many employers instead of relying on only one source of income.

Despite the upside potential, the concern for contract workers is well-placed because the lack of benefits and security mean more risk. For that reason alone, contractors should be paid more, and sometimes they are. Incorporated, self-employed (pdf) workers are paid more than salaried employees (unincorporated get paid less)…