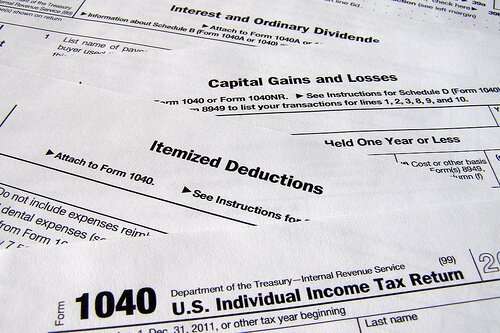 As a normal employee, you will have your income tax automatically deducted from your regular checks, as well as social security taxes and fees for any benefits you receive. Independent contractor taxes are different.

As an independent contractor you will need to estimate the amount of tax money you owe, put it away each pay, and pay out quarterly to the federal government. You will then account for what you have paid at tax time every year and either receive a refund for over-payment, or be responsible for under paying (sometimes with a small penalty).

The only way to avoid paying this extra tax is to become a regular employee and cease operating as an independent contractor. It is, unfortunately, part of the cost of doing business. In the end, the government doesn’t see it as more taxes—their cut is the same; it’s just coming from one person instead of being split between a person and a company.

The forms for independent contractors are similar to, but not quite the same as, those completed and received by a regular employee. Instead of a W-4 form, independent contractors complete a W-9 for each job for which they are contracted. Then, at the end of the year, they receive a Form 1099-MISC to report the payments they’ve received.