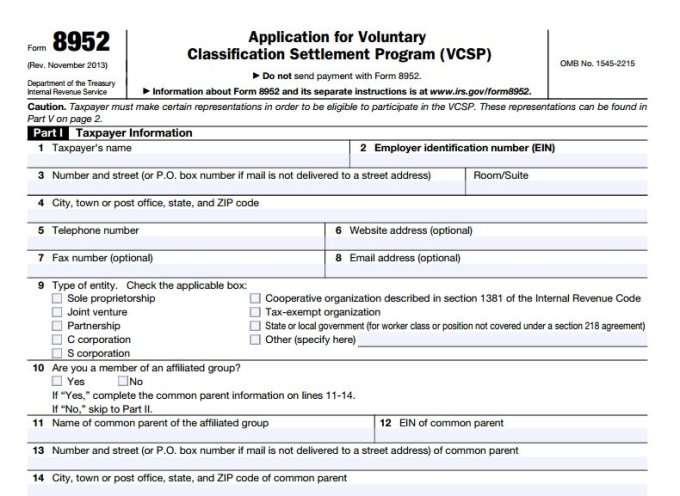 In 2011, the Internal Revenue Service introduced the Voluntary Classification Settlement Program (VCSP) to encourage taxpayers to comply with past tax obligations. It is intended to give businesses a chance to remedy past classification mistakes, and offers a more lenient penalty framework in which businesses pay reduced back taxes and avoid interest and penalties.

According to a report by the Treasury Inspector General for Tax Administration, more than 25,000 workers from 1,303 entities have been reclassified under the program from its inception through April 2014.

According to the IRS, the VCSP offers the following benefits to taxpayers:

To participate in the VCSP, an employer must meet certain eligibility requirements and file form 8952, Application for Voluntary Classification Settlement Program, and enter into a closing agreement with the IRS. When originally announced, for an employer to participate in the VCSP, the employer must have consistently treated its workers in the past as nonemployees, and must have filed all required Forms 1099 for the workers for the previous three years. Also, the employer could not be under audit by the IRS, the U.S. Department of Labor (DOL) or a state agency concerning the classification of the workers at issue.

In 2012, the IRS issued Announcement 2012-45 to revise eligibility requirements under the VCSP. These revisions:

Additional information about the VCSP is available on the IRS’s website here.