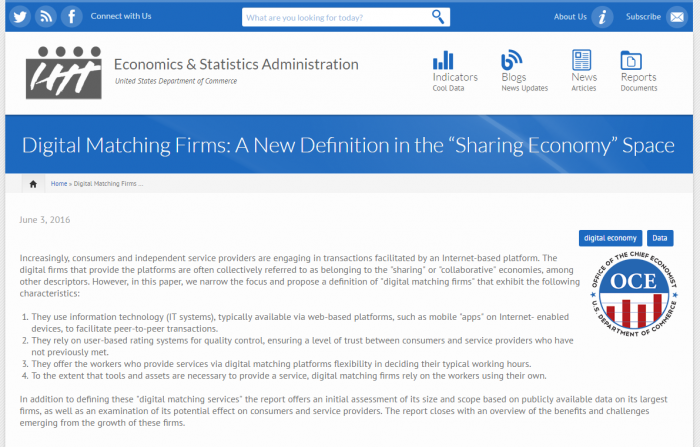 From JDSupra, Janet Hendrick discusses a recent paper issued by the Commerce Department on the gig economy. Janet writes:

In June, not wanting to miss the party, the U.S. Department of Commerce contributed a twenty-seven page paper on the subject, coining the new name “digital matching firms.”

About that name: the Commerce Department takes issue with the names “sharing” or “collaborative” economies, explaining in one of several text boxes that these names imply services are being provided for free. For anyone who believed that they could Uber for free or stay gratis in a Maui condo courtesy of Airbnb, the feds have cleared that up for you.

The paper lists four characteristics to define “digital matching firms.” First, digital matching firms use IT, typically via an app on a smartphone, to facilitate peer-to-peer transactions. Second, they rely on user-based rating systems to create trust between people who are often strangers. Third, they offer workers flexibility, allowing them to work when they choose. And fourth, they rely on workers to provide any needed tools or assets to perform the service. While these companies may share other attributes, such as bilateral rating systems and a range of pricing structures, the Commerce Department did not find those characteristics critical to its definition.

In addition to identifying key characteristics, the paper lists examples of companies that fall outside its definition, such as Craigslist, Amazon, and freecycle. The Commerce Department excludes these companies from its new definition either because they don’t use a rating system (Craigslist), no money is exchanged (freecycle and others), or for other reasons. A categorized appendix lists more than 100 companies that the Commerce Department identifies as “digital matching firms,” noting that the list is neither authoritative nor comprehensive.

With its new definition (ostensibly) clarified, the paper then discusses data, or, more accurately, the lack of data. While offering some estimates of the size and scope of these companies, the paper points out that available information is speculative because many of them are privately held. Relying on available data compiled by PwC, MBO Partners, PiperJaffrey, and JPMorgan Chase, the paper estimates that about 3 million Americans (9% of independent workers) provide services through on-demand platforms. About 500,000 of those provide services through Uber, Lyft, and Airbnb. That’s not surprising, given that Airbnb makes up about 2% of the American accommodations market (and is currently valued at more than $25 billion – more than the Marriott hotel chain and closing in on that of the Hilton hotel chain), and Uber and other rideshare companies make up more than 5% of the $90 billion global taxi marketplace.

Source: Some Thoughts from the Feds on the Gig Economy | Fisher Phillips – JDSupra