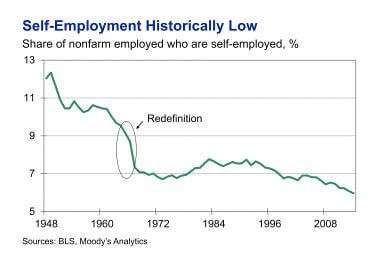 From Moody’s Analytics Dismal Scientist, Adam Ozimek reports that the percentage of unincorporated self-employed workers is declining and at a low point compared with other times in the past 70 years.  Adam writes:

“High-profile stories about “sharing economy” companies such as Uber, whose drivers are contractors instead of employees, have led to breathless stories about how the nature of jobs is changing. “Contract work is becoming the new normal,” says one example of the genre. However, data from the Current Population Survey suggest that if the end of employment-as-usual is coming, the change hasn’t started showing up yet.

For starters, you might guess from coverage that self-employment is at an all-time high. In fact, the share of the workforce reporting they are unincorporated self-employed is declining and lower than at any point in the last 70 years.

Similarly, the image of millennial workers cobbling together a living via multiple part-time gigs is commonly invoked. However, the share of employed reporting they have multiple jobs is also declining and at a 20-year low…”

Of course, unincorporated self-employed workers may only be one segment of the freelancer population.   As Justin Fox in Where Are All the Self-Employed Workers? there is a significant challenge in defining and measuring who freelancers or independent workers are — are they hairdressers or web designers?  Drivers or financial analysts?   Analyzing the number of self-employed workers is a helpful step but more analysis is needed.