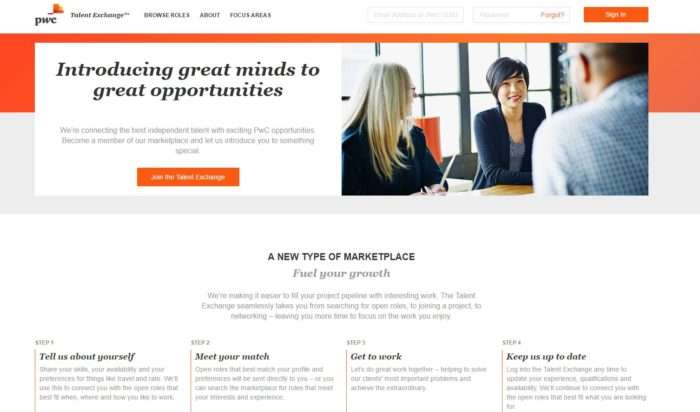 From Fortune, Claire Zillman discusses PWC’s initiative to connect with independent workers to to fill their positions.  Claire writes:

The company said Monday that it has launched a marketplace where freelance workers can upload their resumés and apply to work on projects for PwC clients. If PwC deems them qualified for a specific project, the freelancers will be invited to bid on the job by submitting their per-hour rate. Then it will be up to PwC to decide what workers get the gig.

Miles Everson, leader of PwC US Advisory, said the platform will allow the firm to tap into the growing segment of the workforce that’s independent. “We’ve seen a big increase in the freelance workforce,” he told Fortune on Monday. Part of that trend is driven by demographics—mainly people retiring. But there are other people who are voluntarily “choosing to move around,” Everson said. “They’re building micro-entrepreneur careers by moving from one set of projects and experiences to another.”

Solid figures for the size of the independent workforce are often fuzzy and hard to pin down, but there is evidence that it’s growing. In October, for instance, the Freelancers Union and Upwork, a freelance talent marketplace, released a survey of 7,100 working adults in the U.S. that showed that one in three U.S. workers—or 54 million people—were freelancing, an increase of 700,000 from the year before.

PwC’s new platform called “Talent Exchange” is only available in the United States and is primarily geared toward the firm’s consulting business. It launched February 8 and as of Friday had garnered 4,650 registrants. Everson said PwC is still determining what percentage of applicants actually come away with a job, but he projected that freelancers will eventually make up 10% of the firm’s consulting workforce in the U.S., which now stands at 13,000.

Read the full story at PWC Launches a Marketplace for Freelance Workers | Fortune.com