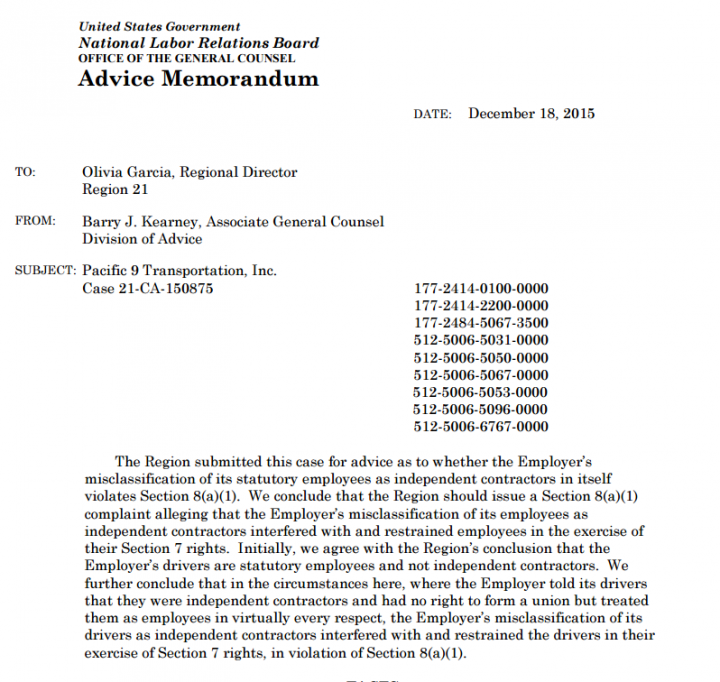 From JDSupra, Adam Smiley discusses the Advice Memorandum on how misclassification of workers as independent contractors may be an unfair labor practice.  Adam writes:

On August 26, 2016, Richard Griffin, the General Counsel of the National Labor Relations Board (“NLRB”), released an Advice Memorandum outlining his legal theory that the misclassification of employees as independent contractors constitutes a standalone violation of Section 8(a)(1) of the National Labor Relations Act (“NLRA”) because, in his view, the misclassification interferes with and restrains the exercise of Section 7 rights.[1]

In Pac. 9 Transp., Inc., the Employer used independent contractor drivers to perform services at the ports of Los Angeles and Long Beach.  In late 2012, the International Brotherhood of Teamsters began a “non-traditional” organizing campaign of the drivers, and as part of the campaign began filing individual wage and hour claims with the California State Labor Commissioner on behalf of drivers, claiming that the Company had misclassified them as independent contractors.  On November 13, 2013, the Teamsters filed an unfair labor practice charge against the Company (21-CA-116403), alleging that the Employer unlawfully threatened and interrogated certain drivers.  In response to the charge, the Company argued that the Region lacked jurisdiction because the drivers were independent contractors.  The Region dismissed this argument and determined that the drivers were statutory employees, and ultimately concluded that the Company had violated the NLRA.

On April 24, 2015, the Teamsters filed another charge (21-CA-150875), alleging that the Company’s purported misclassification of its drivers, by itself, violated Section 8(a)(1).  The Advice Memo regarding this charge concludes that, “the Region should issue a Section 8(a)(1) complaint alleging that the Employer’s misclassification of its employees as independent contractors interfered with and restrained employees in the exercise of their Section 7 rights.”

This novel theory will surely be challenged. The very premise of the General Counsel’s determination that a mistaken classification decision violates Section 8(a)(1) is tenuous and untested.  And even if a court agrees with this concept, Board action is ripe for a preemption challenge, at the very least regarding violations under the Fair Labor Standards Act.